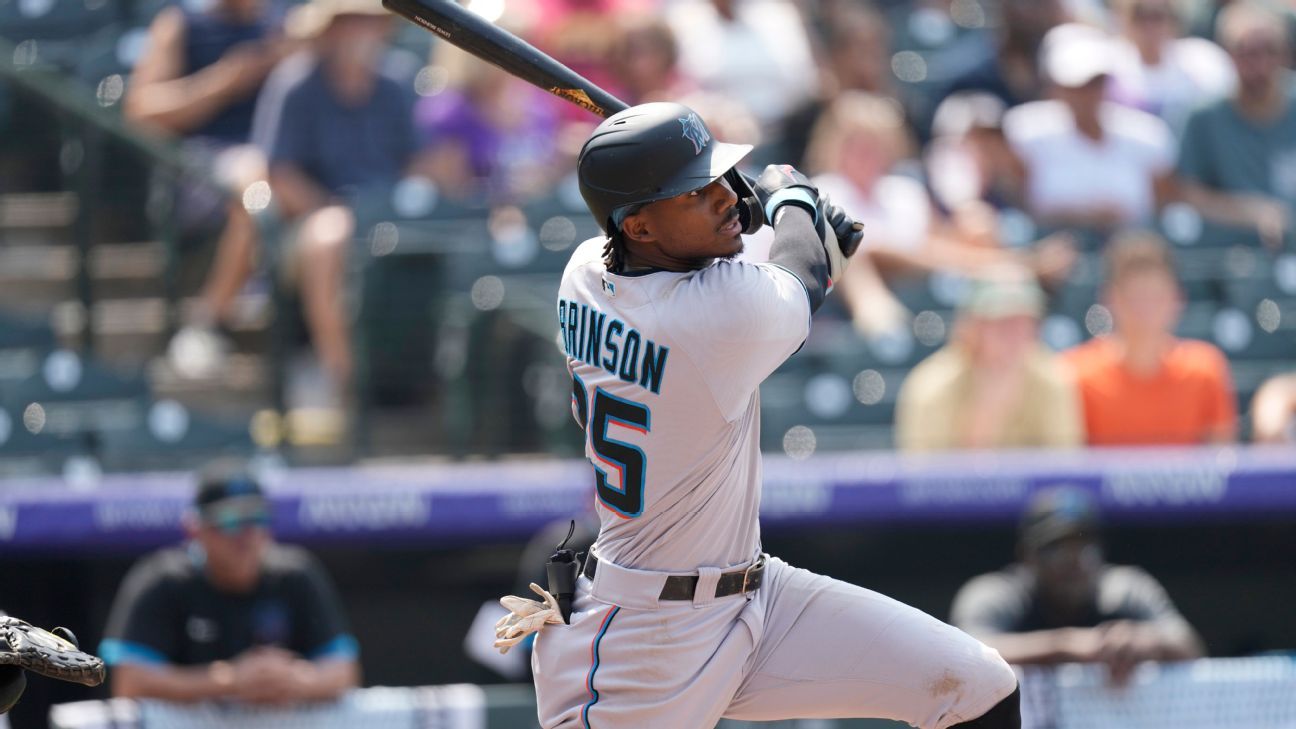 DENVER — The Colorado Rockies said a fan was yelling the name of team mascot Dinger and not a racial slur during Sunday’s game at Coors Field. The Black player who was batting at the time isn’t so sure.

Miami Marlins outfielder Lewis Brinson said he didn’t hear the fan shouting during the game, but a day later, he’d reviewed the tape and had a different opinion.

“So I watched the video at least 50 times in the past 15-16 hours,” Brinson said on a videoconference call before Monday night’s game at San Diego. “I watched it a lot, especially when I heard that he said Dinger instead of the N-word.”

“But to now, saying that again, I haven’t talked to the Rockies or that fan personally. If that’s the case, then I’m sorry for any backlash or anything he’s getting right now,” he said.

The Rockies said Monday that the fan, who was not identified, was actually hollering at the club’s purple, polka-dotted dinosaur mascot.

“After a thorough investigation that included calls, emails and video clips from concerned fans, media and broadcast partners, the Colorado Rockies have concluded that the fan was indeed yelling for Rockies mascot Dinger in hopes of getting his attention for a photo, and there was never any racial slur that occurred,” the team said in a statement.

“The Rockies remain dedicated to providing an inclusive environment for all fans, players and guests at Coors Field,” the team added, “and any fan using derogatory language of any kind will be ejected from Coors Field.”

The team said fans who were seated nearby contacted the club in defense of the fan after it put out a statement Sunday night saying it was disgusted by epithets hurled at Brinson when he was up in the ninth inning of Colorado’s 13-8 victory in Denver.

The club then contacted the fan, who explained it was just a big misunderstanding and that he was only trying to get the attention of Dinger, who was two sections over.

The man’s shouts were picked up by both teams’ broadcasts although the Bally Sports Florida broadcast was clearer than Colorado’s because Rockies broadcaster Drew Goodman was talking at the time.

Nobody on the field, including Brinson, reacted to the shouts.

After the game, Marlins spokesman Jason Latimer said the team was aware of the clip.

“Neither Lewis, nor any other Marlins on the field or in the dugout, heard what was shouted,” he said in a text message to The Associated Press. “We brought the matter to the attention of the Rockies. How the matter is being handled, I would have to defer to them.”

The Rockies condemned the suspected conduct in a statement released Sunday night.

“The Colorado Rockies are disgusted at the racial slur by a fan directed at the Marlins’ Lewis Brinson during the ninth inning of today’s game,” the team said in Sunday’s statement. “Although the subject was not identified prior to the end of the game, the Rockies are still investigating this incident.

“The Rockies have zero tolerance for any form of racism or discrimination, and any fan using derogatory language of any kind will be ejected and banned from Coors Field.”

Brinson said he didn’t hear the fan during his at-bat and had no idea what was going on until after the game when he started getting messages on Instagram.

“I’m getting a lot of love and support on Instagram and I’m sure on Twitter. I appreciate that wholeheartedly, 100%. Again I’m a human, I have sympathy. If he was yelling for the mascot, I am sorry for any backlash or any unnecessary attention he’s getting right now,” he said.

Fans at Coors Field had started to fill the lower deck of the stadium in the late innings, moving closer for a postgame concert that was part of a Faith Day celebration.

Team officials weren’t able to debrief ushers in the area where the fan shouted until after the concert ended about an hour later.

Brinson got two hits and scored twice, and drew a walk in the ninth inning. The 27-year-old Brinson is in his fifth season in the major leagues.

The Rockies don’t plan to make any changes to the mascot’s name.