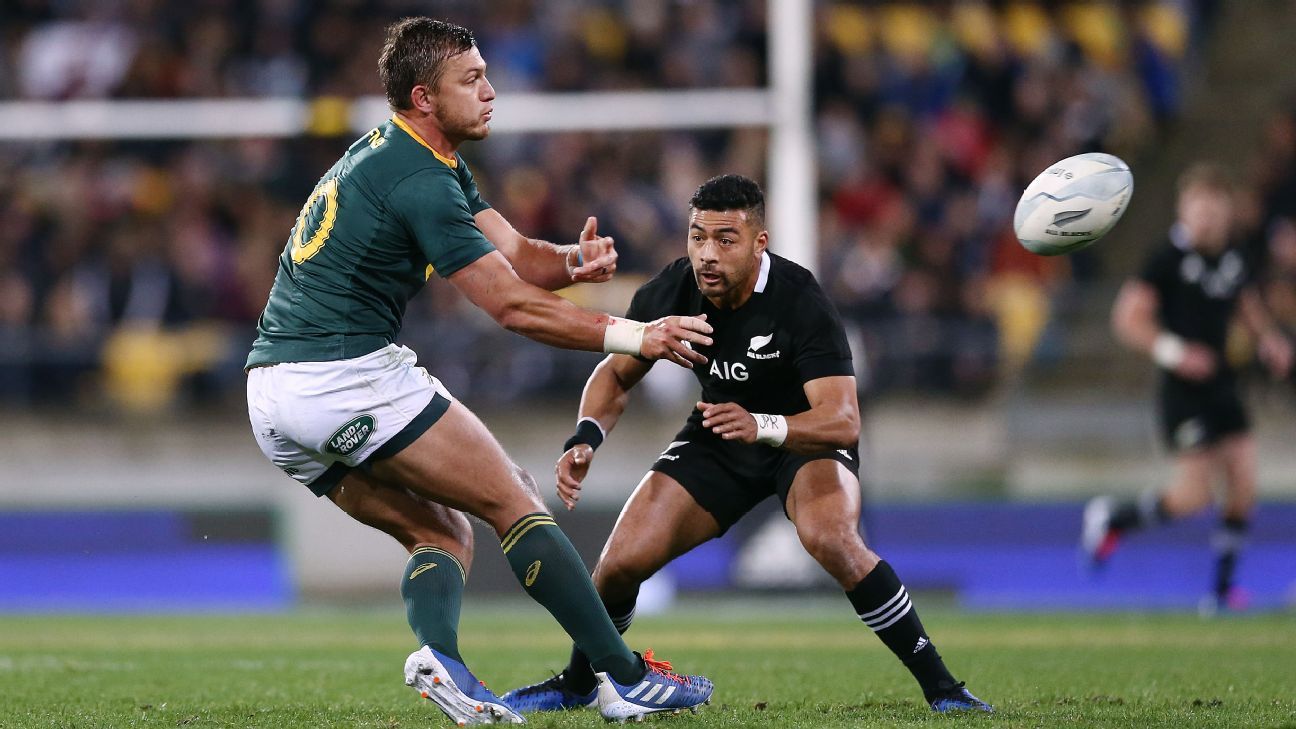 After a one-off Tri Nations tournament last year, the Rugby Championship is back to decide southern hemisphere rugby supremacy in 2021.

Fresh off their 2-1 series defeat of the British & Irish Lions, the Springboks will rejoin the All Blacks, Wallabies and Pumas after South Africa opted out of last year’s tournament due to concerns over player welfare.

Given the ongoing challenges of the COVID-19 pandemic, the tournament schedule has had to be rejigged and there are further changes set to be announced over the coming weeks.

In all likelihood, after this weekend’s opening two games in Auckland and Port Elizabeth, and the second Springboks-Pumas clash at the Nelson Mandela Bay Stadium on Saturday week, the remainder of the tournament will be played out of Australia.

Read on as we break down each team’s squad, chances of lifting the trophy and a predicted Championship finish.

For the second straight year, Los Pumas will contest the entire southern hemisphere showpiece away from home. Having completed marathon stints of hotel quarantine just to get to Australia last year, Argentina have had an easier preparation this time around and even managed to get in some warm-up games against a Wales team that was missing all of its Lions contingent. Mario Ledesma’s side drew the first Test 20-all, but were far too strong in the second match, winning 33-11.

Those Tests put them well ahead of their preparation for last year’s Tri Nations; but one must remember that they registered a maiden victory over the All Blacks having not played a Test since the 2019 World Cup. Ledesma, no doubt, will be thankful for having had the double hit-out this time around, though.

The Pumas’ strength remains their forward pack. The crux of the unit has now been together for some time and the physical, committed edge they bring was evident in the upset over the All Blacks last year. Pablo Matera may have been stripped of the captaincy, but the Crusaders-bound back-rower remains the team’s talisman and one who is ably supported by the likes of Marcos Kremer, Facundo Isa and skipper Julian Montoya.

The backline and wider game management remain the responsibility of Nicolas Sanchez, but the Pumas have attacking threats in the experienced Geronimo de la Fuente and Matias Moroni, while Santiago Chocobarres, Bautista Delguy and co. provide the finishing touches further out if given enough space to work in.

Ledesma has built an impressive squad since taking charge of the Pumas in 2018 but he will be desperate for the team to take another leap forward from last year’s 1-1-2 Tri Nations record. Set for their 10th season in the southern hemisphere showpiece, the Pumas have the ability and experience to record their best finish yet. They will, however, have to do it entirely on the road.

Battle-hardened after a tough three-Test series with France and the weekend’s 33-25 loss to the All Blacks, the Wallabies have few excuses not to perform to their ability in this year’s Rugby Championship. While they were still finding their feet under Rennie last year, Australia have since had four further Tests to familiarise themselves with the Kiwi’s approach and the understanding appears to be building.

Rennie has also introduced no less than 13 new faces to Test rugby, which means his squad is the least experienced of any contesting the Championship. In the weekend’s Bledisloe Cup clash, for example, only Tom Banks boasted more than 10 Test caps among the Wallabies backline.

One of the Wallabies’ biggest challenges in last year’s tournament was breaking down the Pumas’ defensive wall; finishing, in particular, proving to be a real Achilles heel and one that cost them dearly in both matches. Just how they front up to South Africa, who play a similar style of game to the Pumas and will look to go to the air a lot more than the All Blacks, will be another test of Rennie’s coaching ability.

A more immediate focus however, is fixing the Wallabies’ starts and, as of the weekend, their lineout. Given the opportunity to assert some early territory and build scoreboard pressure, Australia’s lineout was an absolute mess at Eden Park on the weekend. Eventually the All Blacks settled, and stung the visitors just as you would expect them to do so.

Favourites for the Championship as is the case most years, the All Blacks had the chance to blow away the cobwebs against Tonga and Fiji, yet there was still elements of rust in the first half or their victory over the Wallabies in Bledisloe I. But given an extended stint of possession early in the second half, the All Blacks quickly took the game away from Australia to put one hand on the Bledisloe Cup.

What has irked coach Ian Foster, though, was the fact that the All Blacks conceded 18 penalties on a night when the Wallabies were able to add some respectability to the scoreboard with three late tries of their own. Back at Eden Park again this week, New Zealand will be hunting a far more complete performance that not only locks down the Bledisloe, but sets a marker for the Rugby Championship as well.

Foster appears to have done away with the dual playmaker 10-15 partnership of Richie Mo’unga and Beauden Barrett, with Damian McKenzie at last getting an extended crack at fullback and David Havili providing a point-of-difference at No. 12 in attack. Their pack, meanwhile, has a wonderful blend of experience and emerging talent, one that has been further boosted by the return of Brodie Retallick after last year’s sabbatical.

If the competition goes to form, the All Blacks are on a collision course with the Springboks in the final two weeks of the Championship; matches that will be keenly watched around the globe. Given the negative rugby that was played during the Lions series, and the Springboks’ ability to put the squeeze on opposition teams through their huge pack and concentrated aerial assault, the back-to-back Tests loom as a contrast of styles and a real insight to world rugby power rankings as we near the halfway point of this World Cup cycle.

World champions. British & Irish Lions series winners. Yep, things sound pretty good for the Springboks. The rugby in the much-anticipated Lions series might not have been much chop, but it reflects the current standing of South Africa and just how hard they are to break down. Their recipe for success is simple, but it remains highly effective. And they have the trophies to prove it, including that as defending Rugby Championship winners after they won the shortened tournament ahead of the World Cup in 2019.

But there is little doubt that there are some final pieces of their victory procession to win yet: A first victory over the All Blacks in three years, and a complete Rugby Championship title. The Springboks last defeated New Zealand in 2018, in Wellington, before a draw in the same city ahead of the World Cup and then a 23-13 defeat in their pool clash in Japan. South Africa had the last laugh in Yokohama, however, defeating England in the final to win the Webb Ellis Trophy.

And the key cogs of that triumph remain. In fact, only five players from the Boks’ Rugby World Cup squad have been moved on or are injured — the biggest being the 2019 Player of the Year Pieter-Steph du Toit — and Nienaber has otherwise introduced some fresh blood with the likes Aphelele Fassi, Jasper Wiese and Damian Willemse. The Boks have also brought back Morne Steyn, who came off the bench to kick the series-defining penalty on the weekend.

While things couldn’t be any brighter inside the Springboks camp, there has been stinging criticism externally of both the way they are playing the game and the actions of director of rugby Rassie Erasmus. World Rugby has moved to bring Erasmus into line, but there is nothing anyone can do but break down their resolute game plan to force a change to the fashion in which the Boks are playing and, it must be said, have done so for quite some time. Saying South Africa is completely devoid of attacking ambition is, however, harsh; Cheslin Kolbe is the wildcard within the world champions’ conservative strategy.

There is a real “we don’t care that you don’t like it, we’re just going to go out and win” attitude about this Springboks team. It’s been good enough to claim the World Cup and now a Lions series, but winning the Rugby Championship would complete a famous treble that eluded even the All Blacks when they drew with Warren Gatland’s team in 2017.