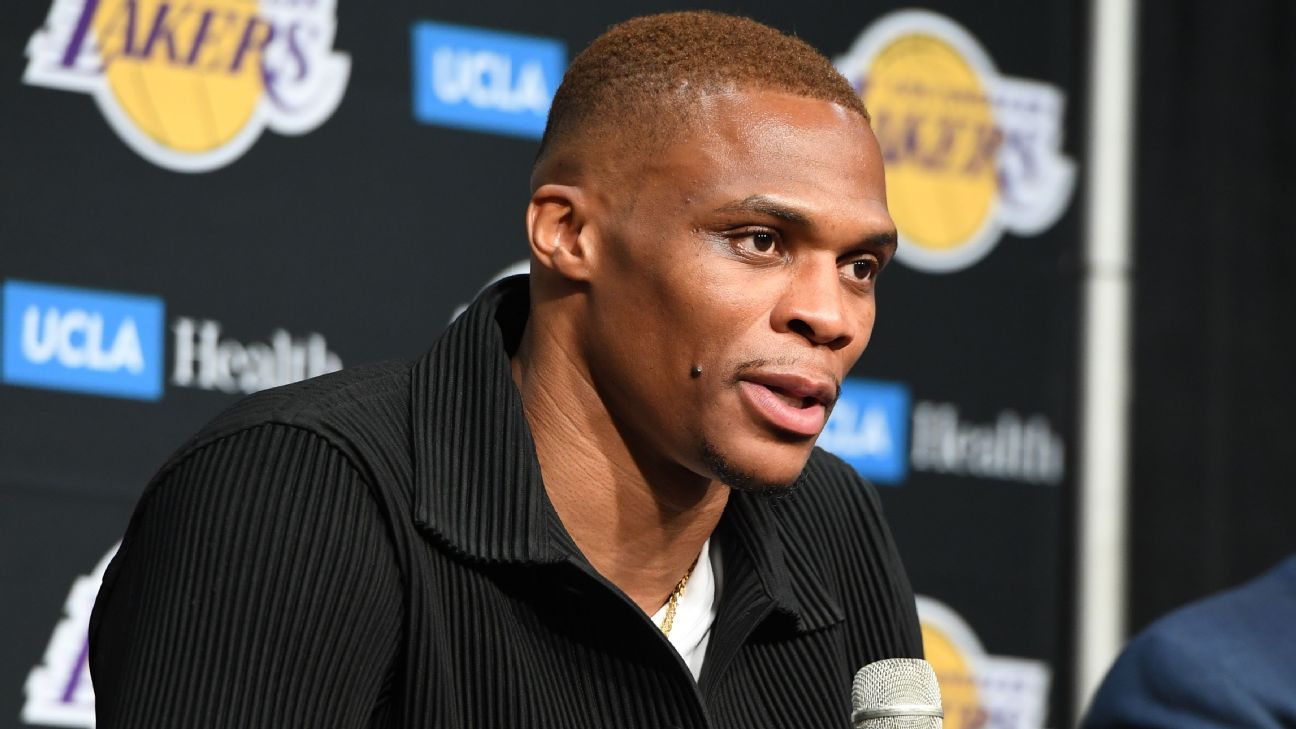 While Russell Westbrook spent the first decade of his career with the Oklahoma City Thunder, maturing from first-round pick to All-Star to league MVP, the thought of returning to Los Angeles someday to play for his hometown Lakers seemed further and further from reality.

“Being from L.A., you always wish that you can play for your home team and be able to do that,” Westbrook said Tuesday at his introductory news conference with the Lakers at Staples Center. “But that’s definitely something that always kind of circled around in my mind. And maybe one day. But I would always come back and be like, ‘Ahh, that probably won’t happen.'”

As improbable as it might have seemed when he became the first player since Oscar Robertson to average a triple-double for a season and stabilized the Thunder organization after Kevin Durant left for the Golden State Warriors, Westbrook joined his third team in the past three years since leaving the Thunder. He has been a Houston Rocket, a Washington Wizard and is now a Laker, holding up a purple-and-gold No. 0 uniform at the end of the day’s festivities.

Westbrook said that as of a couple of weeks ago, a return to L.A. still seemed unlikely, with two years and $91 million still owed to the 32-year-old combo guard. But a conversation with LeBron James, whom he described as a friend before he’s a teammate, started to change things.

L.A. traded Kyle Kuzma, Kentavious Caldwell-Pope, Montrezl Harrell and its 2021 first-round pick to Washington for Westbrook on draft day last month, the first step in what turned out to be a near complete overhaul from last year’s roster that lost in the first round of the playoffs to the Phoenix Suns.

Two of the titles the Lakers earned came at Westbrook’s expense. Kobe Bryant and L.A.’s run to the 2010 ring started with a first-round win over Westbrook’s Thunder. James and the Lakers’ bubble championship in 2020 included beating Westbrook’s Rockets in the second round.

While Westbrook never played with Bryant outside of the Olympics and All-Star Games, he felt a kinship with the late, great Lakers guard.

“It hasn’t left my head. Things that we talked about — me and him — just the potential of me being able to be a Laker, understanding what that entails,” he said. “It’s just crazy to think about, and that will be with me every time I put that Laker jersey on.”

Pelinka, who was Bryant’s agent and close friend, recalled fondly that Westbrook was on the short list of players whom his former client believed to embody the “Mamba Mentality.”

“The initial thing that kind of brought us together was being able to compete and not being able to take nights off,” Westbrook said of Bryant.

And the Lakers’ addition of Westbrook should allow James — who is entering his 19th season and will turn 37 in December — to take some of the load off his shoulders.

“Bron is one of the best players to play this game, and his ability to be able to kind of do everything on the floor allows me to be able to just figure it out,” said Westbrook, who led the league in assists last year. “I’m coming to a championship-caliber team and my job is to make sure that I’m able to make his game easier for him, and I’ll find ways to do that throughout the game.”

Lakers coach Frank Vogel joined Westbrook and Pelinka at Tuesday’s event and declared that L.A. would become an “extremely dynamic, fast-breaking team” with Westbrook added to the fold with James and Anthony Davis. And Vogel downplayed any fit issues between the trio because they are “all make-the-right-play players.”

Westbrook, flanked at the event by his father, Russ, his mother, Shannon, and his brother, Ray, made one thing abundantly clear, however: His fit with the city of Los Angeles couldn’t be better.