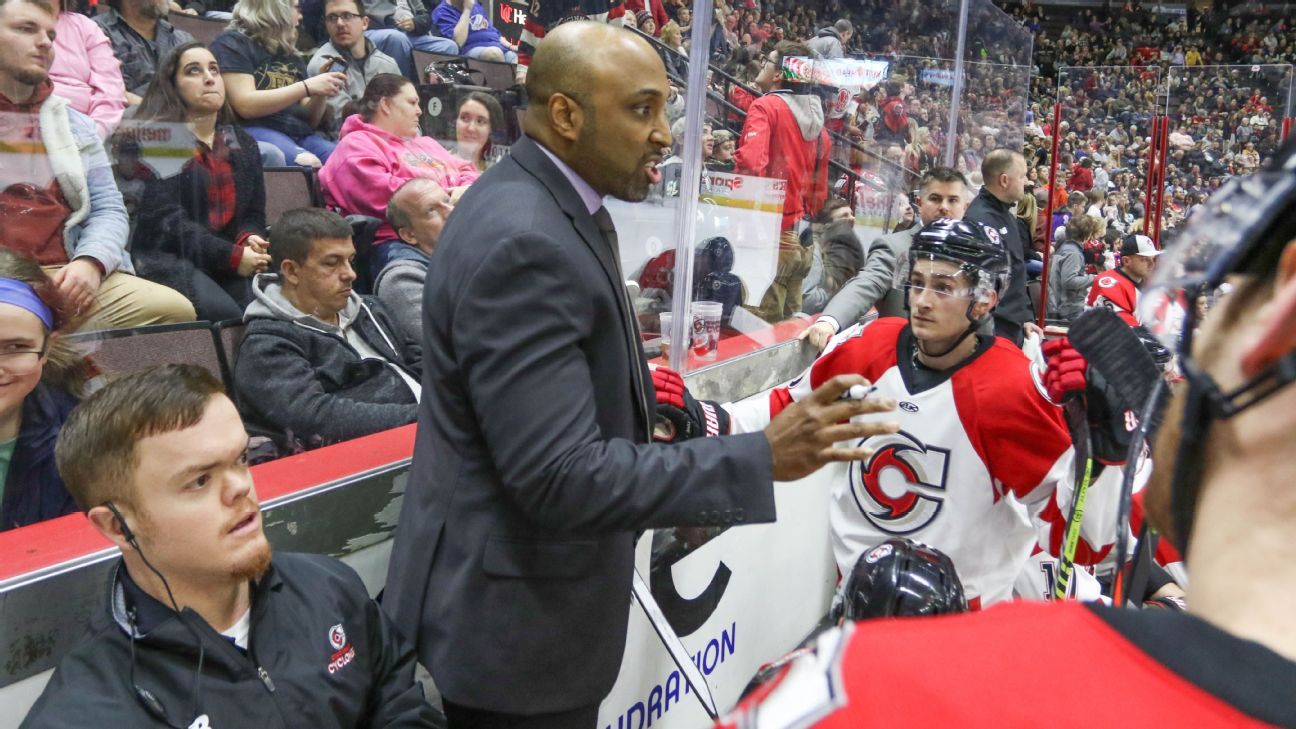 Jason Payne has been hired by the ECHL’s Cincinnati Cyclones, making him the only Black head coach in North American professional hockey next season.

Payne, 45, was promoted from assistant coach after Cyclones head coach Matt Thomas was hired by the Providence Bruins of the AHL. Payne, who grew up in Toronto, had a 14-year pro career as a player, making it as far as the AHL.

Payne said “there weren’t many Black coaches as I was coming up, but when there were, you took notice.” Payne hopes his hiring will help inspire others.

“It’s important for younger players to see familiar faces, saying, ‘yeah, maybe I can be the guy behind the bench, maybe I can be someone in hockey operations, maybe I can be a video coach,'” Payne told ESPN. “The more you see the faces the more it sheds light on the opportunities that are possible.”

Payne’s ultimate goal is to coach in the NHL. Dirk Graham became the first Black head coach in the NHL in 1998-99, but was fired by the Chicago Blackhawks during his first season. There hasn’t been another Black head coach in the NHL since. “Gary Bettman and the NHL do a great job trying to open the doors with diversity, and a lot of teams are doing the same. This wasn’t a thing years ago,” Payne said. “They’re trying to change the narrative. All we can do now is stay consistent at it, keep pushing for those doors to open. Those are my goals. I’m doing the best I can and working as hard as I can. You need to trust the process. It’s not always an easy process, but you have to trust it. What’s happening to me now is monumental for my life, but hopefully it leaves an impact in the hockey world as well.”

Payne, who has been a member of the NHL Coaches Association’s BIPOC program aimed to support minority coaches, was invited to speak at the organization’s global clinic in May. Payne said that speaking engagement opened new opportunities, and he interviewed with several ECHL and AHL clubs this offseason.

Thomas initially brought Payne with him to Cincinnati in 2018. In two seasons together, the Cyclones were 89-30-12-4 and qualified for the postseason twice. Thomas was the 2019 ECHL Coach of the Year.

The Cyclones are led by Kristin Ropp, who is the only woman serving as general manager of an ECHL team – or AHL or NHL team for that matter.

“I don’t want Jason to get attention for the wrong reasons – he deserves this,” Ropp told ESPN. “But in one sense, it’s almost kind of sad that we’re in 2021 and he’s the only Black head coach in pro hockey right now. It rattles me. It’s really a shame.”

Ropp attended an NHL Diversity and Inclusion meeting in Florida before the pandemic.

“It was amazing, because I love the fact the NHL is extremely transparent,” Ropp said. “They’re saying, ‘We need to work on this. We’re really white, and we can’t be. That’s not what the general population is, so that doesn’t make any sense.'”

Payne said his coaching style is all centered around understanding his players as people. The Cyclones will be his first head coaching job, and he will continue to serve as the team’s Director of Hockey Operations and work with the Cincinnati Cyclones Foundation which is helping grow the game of hockey in the Greater Cincinnati Area.

“I wasn’t a natural goal scorer, I worked hard, was physical, and fought every chance I could,” Payne said. “I know how hard I worked to play pro hockey for 14 years, and try to make it to the NHL.I only made it to the AHL. But if I fought that hard to play, why would I not fight just as hard, if not harder, in coaching?”

Which players have impressed at the men’s U19 Euros?
Why Khabib Nurmagomedov calls Bellator’s Gegard Mousasi ‘the most underrated fighter in MMA’
Future Power Rankings: College football’s best teams over the next three years
Lightning reclaim the lead, best buddies in the stands and more from Game 5 of Stanley Cup Final
Ella reluctant, but ‘honoured’ by Cook Cup overhaul