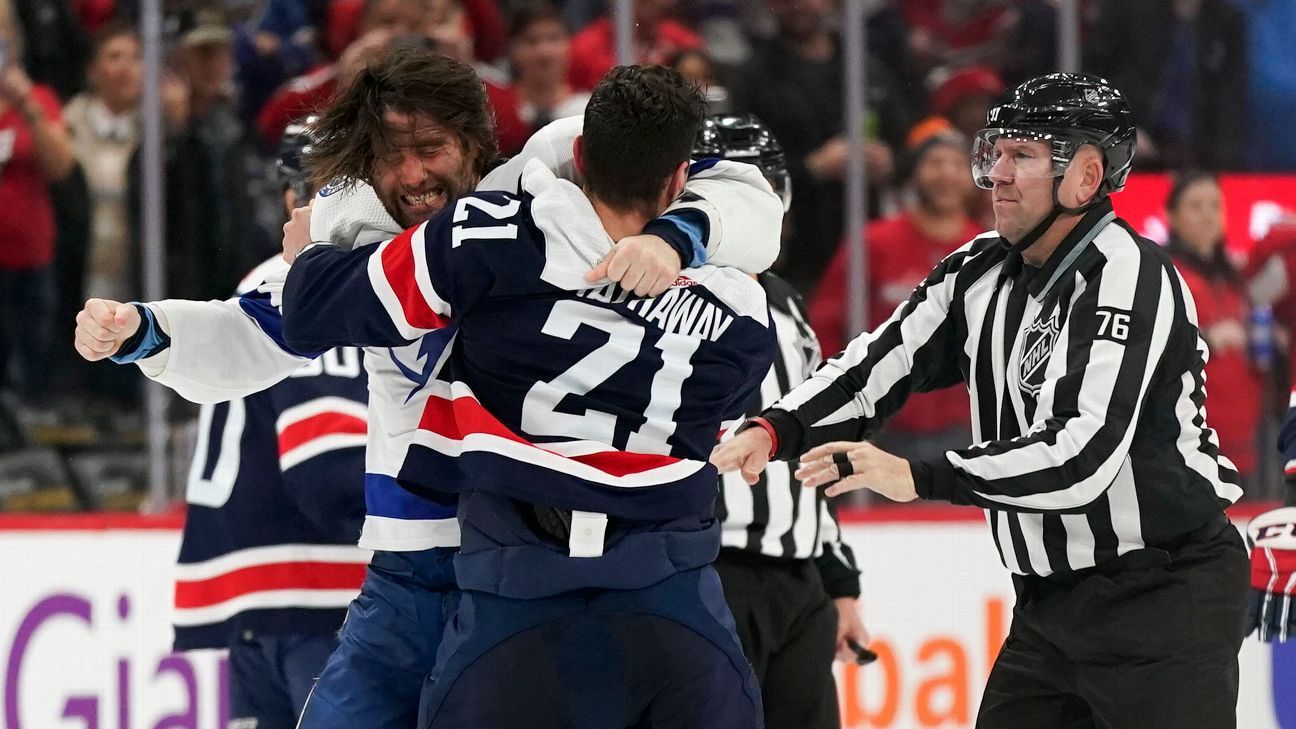 That was just the start of the fisticuffs as tensions boiled over Friday night between these teams, which face off again Sunday in what could be another feisty game for players with short memories.

“I don’t know about that but probably,” Lightning defenseman Victor Hedman said after his team lost 5-1. “Two teams that want to win hockey games. That was a bad hit, and it set the tone for the rest of the game.”

Aube-Kubel was ejected and assessed a match penalty, which is an automatic suspension pending review by the NHL’s department of player safety. If suspended, he’d miss at least the second half of the home-and-home series, if not more for a hit Tampa Bay coach Jon Cooper said “defines the word blindside.”

The Lightning were none too happy with Aubel-Kubel’s hit early in the second period that knocked Foote out of the game. Maroon just didn’t wait until the next shift to express it.

“That’s what Patty does,” Hedman said. “He stands up for his teammates. He’s not going to take anything. That fired up the bench.”

A handful of other players were involved in the initial scrum, and they exchanged some pushes and shoves around the fight before Maroon and Hathaway got separated. Nick Paul hopped off the bench for a second before being urged back by Lightning teammates to avoid what would have been an automatic 10-game suspension.

The Capitals killed off all five minutes, and Sonny Milano — who was serving Aubel-Kubel’s penalty — scored coming out of the box on a breakaway 7 seconds after the Lightning power play expired.

A few Washington goals later, a line brawl erupted with 5:40 left in the third with Tampa Bay’s Corey Perry fighting Anthony Mantha and teammate Vladislav Namestnikov dropping the gloves with Washington’s Erik Gustafsson. With some roughing mixed in, the incident added up to 26 penalty minutes and finished with Mantha’s second career Gordie Howe hat trick — a goal, an assist and a fight.

“I think it’s going to be the same,” said Kevin McCarthy, who coached the Capitals in Peter Laviolette’s absence. “When you play a team back to back, there’s always something that carries over from the previous game. Especially the way the game went tonight, it was physical on both sides and we expect that again.”

Offensive Player of the Year predictions and pros and cons for 10 favorites
Formula 1: Ferrari team principle Mattia Binotto to leave at end of year
Busy Angels bring on Renfroe in Brewers trade
‘It’s joy’: NC State beats rival No. 17 UNC in 2OT
Everything you need to know for NFL Week 12: Let’s preview every game — and predict who will win