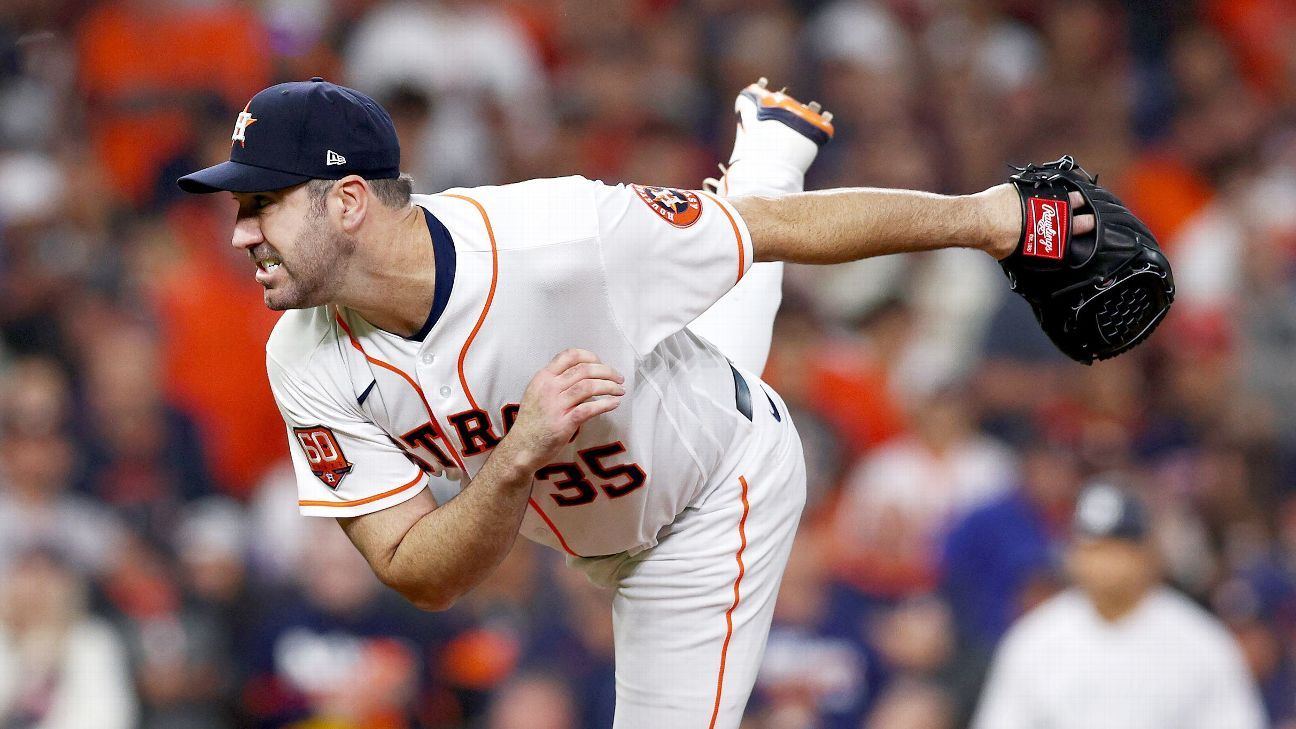 SAN DIEGO — When Jacob deGrom jumped to the Texas Rangers last week, it seemed certain that the New York Mets would move quickly to respond. There are only so many options at that stratosphere of the free agent market, and with the uncertainty over whether or not deGrom would return to Flushing gone, there was suddenly nothing to hold general manager Billy Eppler and owner Steve Cohen back. And sure enough, Justin Verlander is now a Met after agreeing to a two-year, $86 million deal on Monday.

To call this signing aggressive would be a bit of an understatement. Just to cite one projection: ESPN’s Kiley McDaniel saw Verlander getting two years but for $36 million in average annual value. The pitching market overall has yielded higher values than most of us foresaw. But Verlander matching the record average annual value the Mets gave Verlander’s once former and future teammate, Max Scherzer, just last year is quite a statement.

So now the Mets will be pushing the $300 million level in payroll in 2023 once the final roster is put together. And over the next two seasons, they will be paying two pitchers nearly $87 million per season. According to Cot’s Baseball Contracts, that’s more than the total Opening Day payroll of eight different teams going into last season.

The Mets will need to get between five and six bWAR each from Scherzer and Verlander to make these valuations work from an actuarial standpoint. Both were in that range last season, but the uncertainty grows with each advancing season for the two aging aces. They might fall short because of injury or decreased durability, but the upside does seem worth the risk — for the Mets. If either of these deals ends up a little underwater, well, the contracts aren’t that long and it’s the Steve Cohen version of the Mets. They can afford it.

It’s worth noting that we simply haven’t seen many one-two pitching combinations this accomplished on the same team. They rank one-two among active pitchers in strikeouts, first and third in wins and first and fourth in bWAR. (Verlander is first on those lists.) Only 33 pitchers in history have reached 70 career bWAR, including No. 27 Verlander (78.1) and No. 33 Scherzer (70.7).

Verlander was a question entering last season after hurting his right elbow at the outset of the shortened 2020 season and making just that lone appearance over a two-season span. While Tommy John surgery isn’t a death sentence for pitchers, there are still uncertainties in the aftermath of it, especially when the patient is in his late 30s, and oftentimes, even hurlers who come out OK need a period to ramp up, even a full season.

Not so for Verlander, whose 2022 Cy Young performance was as good of a proof of concept any injury returnee has ever presented. He led the American League in ERA, ERA+, WHIP, wins and winning percentage. His results this season were indistinguishable from those before the injury, other than the fact that he was generally asked to carry a slightly lesser workload than in his last healthy season in 2019.

While the results were the same for Verlander, the process was a little different. He threw fewer four-seamers, though the decrease was nominal and the heaters he did throw were at a similar level to his pre-injury velocity, albeit with less spin. But the biggest changes were that Verlander evolved his slider into a lower-spin version and put more emphasis on his use of curveballs. The outcome? Opposing hitters hit .158 off Verlander’s hook, according to Statcast data.

How much will Judge, Correa, Turner and others get paid this winter? Kiley McDaniel breaks down this year’s free agent class.

For the Mets, the fact that Verlander’s epic 2022 comeback was built on a foundation of successful, late-career adjustments is a great reason to think he’ll continue to deal over the next couple of years even though he turns 40 before the start of next season.

Still, the Mets will have to build and maintain quality rotation depth behind Scherzer and Verlander to navigate the regular season, because the most important thing about having two all-time greats atop your rotation is having them at their best when the playoffs begin. The Mets weren’t able to quite do that with their two aces last season.

For Verlander, even though he’s never pitched in the National League, the Mets seem like a great fit. Citi Field is a terrific park for pitchers and the Mets are all-in on winning now, as evidenced by their massive payroll. Verlander needs 56 wins to become the next 300-game winner, and he seems intent on reaching that milestone. Spending the next two or three seasons in Flushing should help him make a lot of progress toward that goal.

Incidentally, because the American League has been the stronger lead in recent history, it’s worth considering Verlander’s aggregate splits between the leagues, while acknowledging that his numbers against the senior circuit are based on small-ish samples and most of them were compiled before the universal DH. Still, the split is stark:

This is one of those deals that if it involved, say, the Detroit Tigers — Verlander’s original team — you might grade it more harshly, given the terms of the contract. Sure, you’re landing a great pitcher, but what does having one player eating up that much payroll space keep you from doing? The same might hold true for teams concerned about a tete-a-tete with the luxury tax thresholds.

But the Mets, under Cohen, are now one of the teams for which one need not hold those concerns. They have seemed all along intent on treating the thresholds as abstract ideas, worth discussing but easily dismissed. The idea is to do whatever it takes to build a World Series winner, no matter how much it costs.

Not every team can do that. The Mets can. Sure, valuations matter, even for the Mets, Yankees and Dodgers, but the baseball part of it is more important. And when it comes to the baseball part of this signing, I’m hard pressed to see anything not to like. In fact, I’ll end with this: As dominant as deGrom has been, his inability to stay on the mound reliably makes Verlander a better fit for the Mets’ quest to win it all than deGrom, age and money concerns aside.